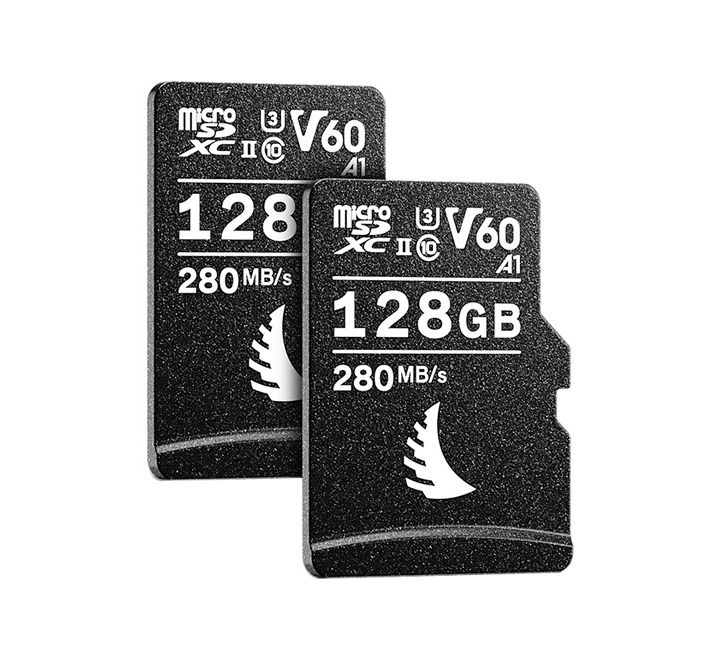 Tested and approved to capture Full HD, 4K, and 6K raw video, the 128GB AV Pro UHS-II microSDXC Memory Card (2-Pack) from Angelbird is designed for drones, actions cam POV recording, camera systems, game consoles, and more. It features a storage capacity of 128GB and takes advantage of the UHS-II bus to support sustained read speeds of 260 MB/s and sustained write speeds of 140 MB/s, as well as sequential read speeds of 280 MB/s and sequential write speeds of 160 MB/s. This card has also been designed with the V60 Video Speed Class rating, which guarantees minimum write speeds of 60 MB/s.

Aside from support for UHS-II, V60, and U3, Angelbird also built this card with support for the Application Performance Class 1 (A1) spec, which includes optimizations to give Android users an improved mobile experience, delivering faster mobile app performance. The A1 spec allows the card to manage random read input-output access per second (IOPS) operations, so it can quickly open apps and process accompanying tasks, such as audio, graphics, saved profiles, and in-app permissions. Built for extreme conditions, Angelbird's 128GB AV Pro UHS-II microSDXC Memory Card is protected against water, shock, x-rays, magnets, and temperatures ranging from -13 to 185°F. Also featured is ECC data reliability, wear leveling, and power management for low power usage. Thanks to an included UHS-II microSD to SD adapter, you'll be able to use this card to be used in SD-compatible devices.

The AV Pro is protected by a limited 3-year warranty. However, to receive the full limited warranty, this product must be registered on the Angelbird Personal Service Portal within 30 days after purchase using the included activation code. If not registered within this period, the market-specific legal guarantee period comes into force.

Not All microSD Cards Are Created Equal

The Angelbird microSD UHS-II V60 card offers a professional level technology with extreme durability, ready to take on elements of land, sea, and sky. With a capacity of 128GB, the AV Pro is a solid media choice for 4K+ drones, action cam POV recording, camera systems, and game consoles. It supports professional codecs such as Apple ProRes and Blackmagic RAW and is fully qualified for leading cameras from Blackmagic, Canon, DJI, Fujifilm, GoPro, Nikon, Panasonic, Sony and more.

Professional Performance for Recording 4K and Beyond

With a capacity of 128GB, the AV Pro has the capability and performance to write large amounts of data, fast. It works well for extended aerial panning shots or part of a multi-cam capture for unique recording angles on set.

Hardware is born out of real-world experiences and testing. Physically tough, shock, dust, x-ray, and water splash proofing with extreme operational testing from -13 to 185°F, the AV Pro microSD is designed to meet the demands of content creation.

Versatility for Your Gadgets